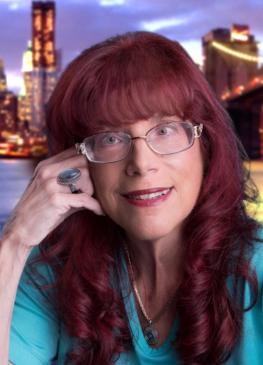 No matter the season or reason, who among us doesn’t love playing armchair detective? In her The Sign Behind the Crime mystery series, author Ronnie Allen invites us on a ride-along through the mean streets of New York … and the meaner minds of crafty villains seeking to elude capture for their dark deeds.

Q: When I read that you and your husband made a relocation leap twelve years ago from the bustle of New York to the rural quiet of Central Florida, I couldn’t help but hear the Green Acres theme song dance through my head. Is it true that you can take the girl out of the city but not the city out of the girl?

A: Totally, Christina. I miss NYC on so many levels; the diversity, the restaurants, shopping, fast paced energy. I don’t think I’ll ever be a Floridian. And I went back home through my novels which are set in NYC. The last time I was in Manhattan was for ThrillerFest in 2015 as a debut author.

Q: Tell us how your educational and professional background made you such a natural to pen a pulse-pounding crime series with psychological elements.

A: For one, psychology is my formal education. I’m a NYS licensed School Psychologist, and have been a teacher in the NYC Department of Education for thirty-three years, retiring in 2003. Aspects of my careers are in my books. The killer in Gemini is a pretend school psychologist, and one of the detectives, Det. Samantha Wright, in Aries and the rest of the series was an elementary school teacher before she joined the police force. My holistic and alternative therapies training and experiences are also in the books, manifested through character development and the plots. Dr. John Trenton in Gemini is psychic and clairvoyant and has the same skills in the areas in which I’m certified. Det. Samantha Wright is at the beginning of becoming in tune with her abilities and her approach was similar to mine when I first became aware.

Q: Did you envision writing a series when you began or did typing THE END on the first book inspire and dare you to not let go of the gritty crime world you had created for your readers?

A: Actually, I didn’t foresee the series until I was in the middle of writing book two, Aries. I had started writing book two before Gemini was in contract. I didn’t want to write the same characters if I didn’t know the book would be picked up. When I was writing Aries, the astrological components started to reveal themselves, and I got that ‘ah ha’ moment. My tag line was The Mind Behind the Crime because I write psychological thrillers. The Sign Behind the Crime popped into my mind as the astrological signs give the clues to solving the crime. I approached my publisher about it and we ran with it.

Q: Whether it’s a novel, a film or a television program, writing about crime requires a high degree of accuracy, plausibility and realism in order for the fiction to ring true. Tell us about the level of research you employed in order to click on all cylinders.

A: Yes, research is crucial in the crime genre. Nothing is as easy in real life as portrayed on TV. I had several consultants; a detective in NYC, and a Captain of Major Crimes here in our small county, and others for the different subplots. I have folders of printed out research from police procedural courses I’ve taken as well as internet searches. I was at FBI headquarters in NYC in 2015 and received a wealth of information there. Also, getting forensic psychiatry correct was crucial for my characters and the situations in which they found themselves. Police procedure, department names, terminology used all vary from state to state. It was interesting to see the differences between the NYC PD and our Sheriff’s office. The author also needs to know what organizational names and locations have to be fictionalized, such as psychiatric organizations, hospitals, and schools.

Q: Do you allow anyone to read your books while they’re still a work in progress or do you make them wait it out? Why does your chosen method work for you?

A: During my writing process, no one reads them. When I get a complete first draft, or second, or third, then I go to my critique partners and beta readers. This works for me because I strongly believe that writing is rewriting and rewriting. Nothing is written in stone in the first or even following drafts. I want people to see my best possible work effort. If someone points out something, I don’t want to say, “Yeah, I know, I have to fix that.” It’s very frustrating for a critique partner to spend their time giving you feedback and then for you to know about it.

A: I started out being a plotter, a very intense plotter. I had Gemini in my brain, and in notes before I hit the computer. As I was writing, if my character started to take over, which they did, I ran with it. The second book was also heavily plotted. Book three, Scorpio, was a mix, and by the time I was writing Libra, I was like, “Whoa, where are you going so fast?” Libra is the longest book.

Q: The four books in your series have all been given the names of zodiac signs. Why is that?

A: I’m a Gemini, so I decided to start with me. It went through several title changes, and when the Gemini aspects came out, I said, ‘that’s it!” And as a series, I felt it was fitting for the rest of the books.

Q: Do they need to be read in order or could each be read as a standalone?

A: Gemini and Aries can definitely be read as standalones. The third and fourth books have the characters from the first two, and I weave in enough backstory so that the reader will not get lost.

Q: Will there be more books in this crime series? (You do, after all, have eight more zodiac signs to go …)

A: I’m not sure. I wrapped up Libra with the happiest ever after the reader could want, so I’m content with ending the series there.

Q: Are any of your fictional characters fashioned after real-life people you know (including yourself)?

A: Definitely me. My readers will learn a lot about me. I’m a part of all of the major characters. My parents, Esther and Sam, are Dr. John Trenton’s parents in the series. It’s their personality, and names, not their careers. I tell my friends that no one I actually know is in the books.

Q: Which of these fictional personas would you most like to go to lunch with (and why)?

A: To go to lunch? Definitely Drs. John Trenton and Frank Khaos. Frank is the forensic psychiatrist who’s introduced in Aries. For one, I love hunky men. Dr. Trenton is a holistic psychiatrist, and I can lean more about Medical Orgone Therapy that is one of his specialties. I participated in this in the 1970’s in another form, and it pivoted me into wanting to work with chakras as part of my holistic healing practice in NYC. Frank is a BJJ fighter and I’m fascinated with martial arts.

Q: What’s the takeaway for your fans after they’ve read the final chapter(s)?

A: There are several takeaways; dreams can be manifested, your childhood traumas do not have to determine the quality of your adult life, resolving an issue from childhood is not as fearful as you thought before you took the action, traumas can push you to be a better more compassionate human being.

Q: As a fellow wordsmith, I have an extensive collection of reference books, most notably the Howdunit series published by Writer’s Digest. (You can imagine how unsettled it made our dinner guests on the occasion I’d leave one out on the coffee table.) Hypothetically, if you were to embark on a successful life of crime, what would you be most likely to pursue?

A: Yes! I can imagine how it made dinner guests feel. I don’t know! If I hadn’t resolved my childhood trauma around asthma like AriellaRose Larcon in Aries, I probably would have been a serial killer. I can’t imagine me hurting anyone, though.

Q: Best advice to aspiring authors before they begin their journey to getting published?

A: Thank you for asking this. I feel too many writers want to cut short this process. My words of advice; make sure you listen to those who have accomplished what you want. For example, in social media groups, be careful on whose advice to take. Don’t fall for any scams. Have critique partners and beta readers go through your manuscript before you submit. I’m a proponent of traditional publishing. Make sure your manuscript is as good as it can be before submission. Read the publishers guidelines on their website before you submit. Follow the directions. That’s a major reason for rejection. If you’re lucky enough to get feedback and it’s consistent between editors, listen. Edit, rewrite. Don’t submit the same manuscript repeatedly with the same errors. The writer has to step back and get their ego out of it. Don’t say, “It’s my manuscript, and I want it this way.” Because I listened, I received my first contract on only my seventh submission.

Q: What do you do to prepare yourself mentally for each new project?

A: When plotting, it comes to me naturally. There isn’t mental preparation. I don’t have to talk myself into it.

Q: What would readers be the most surprised to learn about you?

A: I’m very much like my characters, except for the murders or violent parts. I’ve had a very pampered life, so writing these scenes is really a stretch for me. Some scenes have actually happened. Not telling which ones, though.

Q: What’s next on your plate?

A: I’m coming from a film and screenwriting background from the late ‘70s through mid ‘90s, and I would like to get my books to a TV episodic series.

A: Thank you so much, Christina. My website is http://www.ronnieallennovel.com, and your readers can find me on Facebook at Ronnie.allen.507. On Twitter and IG, I’m @ronnieanovelist.