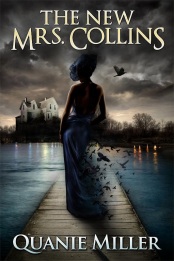 Oh, what a tangled web we weave…when first we practice to deceive. ― Sir Walter Scott

A beautiful woman with mysterious powers. One stolen man and two southern gals with different agendas. In Quanie Miller’s second novel, The New Mrs. Collins, set in a small Louisiana town, a broken heart sends Leena Williams digging into a world of buried secrets. Based on her suspicions about the graceful yet ruthless Adira Collins, Leena soon finds the old adage to be true: looks can be deceiving, and deadly as well.

I’m a married mother of one. I’m from New Iberia, a small town in Southwest Louisiana that sits right on the Bayou Teche and is rich in history. I spent most of my youth reading so many books that my cousins would look at me like I was crazy. “You aren’t gonna play outside? And you’re gonna read that whole book?” Then, they would shake their heads in amazement. I love writing about strong-willed women who can’t keep themselves out of trouble and setting my stories in fictional, Louisiana towns.

What moved you to write about this plot?

I wanted to explore what would happen when a woman pulls the veil back on the seemingly normal world she lives in. The main character, Leena, has lived her whole life in this small Louisiana town, never once suspecting that there are people in the world with mystic powers, and all of a sudden, not only does one such woman come into her life, but the woman is beautiful, has stolen her fiancé, and is now the stepmother to her son! In an attempt to solve the mystery of who this woman is, Leena ends up going down the proverbial rabbit hole. I was intrigued by how I might get her out of it.

Is there one fact about your book that stands out more than any others?

When I sat down to write the first draft of The New Mrs. Collins, a funny voice took over and it turned into a comedy! I was going to tell the story from the point of view of a nanny who discovers that her boss’ new wife is a sinister woman with mystic powers. This is how the story was going to go: the nanny, because of a flat tire, would get stranded in an affluent neighborhood without a cellphone, end up knocking on a random door, mistaken for an interviewee, and land the nanny job by mistake. But when I put the character on the page, this humorous voice took over, and the nanny-to-be never made it into the house. That character ended up being Jasmine T. Peacock, the protagonist of my first novel, a romantic comedy called It Ain’t Easy Being Jazzy.

What if I asked you to summarize your latest book in one line?

When Leena Williams suspects that there’s something otherworldly about her son’s new stepmother, she goes digging for answers and discovers a little too late that some secrets are better left buried.

Based on your experience, what has been the best part of the writing process?

I think it’s the feeling you get when the story in your head (finally!) matches what you put on paper.

Is there something you wished you’d learned earlier as a writer?

That you should get as much feedback on your work as possible so that you can learn what you do well and hone that.

We all feel that buzz of confidence when our work is done and that feeling of accomplishment abounds. What have you found your greatest strength as a writer to be?

I’d have to say my ability to infuse humor into pretty much anything that I write. It’s not even something I try to do. It just happens.

Sum up a few interesting tidbits about Quanie Miller that make us go hmmm.

I trip getting inside of my own car. I’m probably the only person in the world who hasn’t taken a selfie. And not because I’m against them but because I’ve tried to do them but somehow, in the images, all I can see is a bright flash of light and the tip of my thumb. Also, while growing up, one of my aspirations was to be a rapping psychologist!

Okay, as an interviewer, that’s the most unique aspiration I’ve heard to date! How about your own feelings as a newly published author-did you have cold feet at some point?

I had doubts about whether or not I could even write a paranormal novel but then I asked myself: what kind of story do you want to see? I knew I wanted to write about a main character I could relate to, from my neck of the woods (Southwest Louisiana!) who discovers that there is a bit of magic in the world. So I re-evaluated the The New Mrs. Collins (whole new plot, page one rewrite), set it in a fictional town in Louisiana called “Carolville,” and it was full speed ahead. It took some time, but I’m so glad I didn’t give up on it because writing it proved to me that if you push through fear and doubt, you can accomplish exactly what you put your mind to.

Do you have any advice for new writers that you’d have given yourself on the journey to self-publishing?

My advice is to hone your craft. Do it any way you can and multiple ways. Take classes on writing. Read books on the craft of writing and study the work of writers that you admire. Study, study, study! And also, believe in yourself, even when nobody else does.

And last but not least. Let’s imagine your book was in the works for a movie. Who do you envision playing your main characters?

Love this question! I could totally see Taraji Henson or Jill Scott playing my main character, Leena. And of course, my BFF in my head, Kerry Washington, playing the villain, Adira.